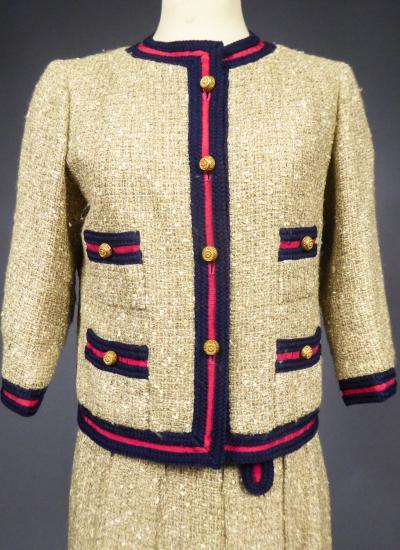 Astonishing and rare skirt tailor of the London Paquin House directed by Alan Graham between 1954 and 1956, date of the definitive closure of the Paquin House. Black and cream checked wool tweed skirt and jacket, highlighted with Fuschia gros-grain and navy wool braids. Hollow buttons in openwork gilded metal, adorns the wrists, four fake pockets and the belt of the skirt with side zipper.

The House of Paquin is located in Grosvenor Street, London, on the occasion of its acquisition by WORTH in 1954. The jacket, like Madame Chanel, is adorned with the famous chain with flat links for a perfect fit. The similarity with the Coco Chanel’s tailor, immortalized since 1954 is a striking one (see the last two photos). Collection item collected in London. No defects. Excellent condition of color and preservation.

Jeanne Paquin, one of the oldest French haute couture houses, moved her headquarters to London at 39 Dover Street in 1896, while keeping her Paris branch. President of the Chambre syndicale de la couture  from 1917 to 1919, Jeanne Paquin retired in 1920, leaving the artistic direction to Madeleine Wallis.

Ana de Pombo replaced her in 1936, the year of the death of Jeanne Paquin, and then gave the place in 1942 to Antonio Canovas del Castillo. While the inspiration of the designer, Jeanne Paquin, draws heavily from the past, she also knows how to adapt and adjust to the evolutions of her time, proposing a tailor model adapted to the «civilization of the metro» or, on the eve of the First World War, an intermediate dress between a man suit and a smoking suit. Colette Massignac, then Lou Claverie, who adapted the style of the collections to Christian Dior’s fashionable New Look, took over the management of the house. On December 31, 1953, the Paquin House merged with the Worth House, the date on which Alan Graham took the artistic direction. In 1956, the Paquin House, suffering from serious financial difficulties, ceased his activity.