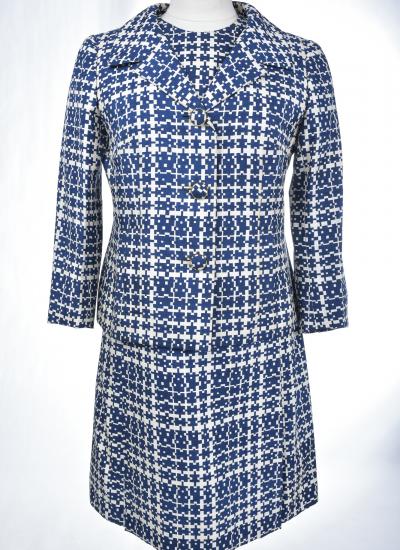 Interesting printed silk suit composed of a sleeveless dress and a jacket probably from the early days of Jules-François Crahay for Nina Ricci. Beautiful navy print with geometric labyrinths on a cream silk twill background. The sleeveless dress called "bag" crew neck with zipper in the back unfolds into the skirt with two large box pleats punctuated by two buttons. It is lined with white nylon.  The suit jacket with wide collar and four large buttons matched brass circled, front and cuffs. Navy nylon lining. Nina Ricci Young Women's Collection label for the first attempts at ready to wear in the 50's. No flaws. Very nice condition of color and conservation.

Jules-François Crahay was born in Liege to an industrialist father and a mother, Françoise, who ran a fashion house. He studied in Paris in the 1930s and then returned to Belgium to work with his mother. Taken prisoner during the war, he opened his own fashion house in 1951 in Paris with Germaine de Vilmorin, but it was not a success. Hired by Robert Ricci, he joined the House of Nina Ricci and stayed there for ten years (1954 - 1963); at first to assist Nina Ricci, he gradually took over the creation of all the models. He achieved his first success in this House in 1959 when he presented the women's collection "Crocus". Thereafter, he joined Lanvin for about twenty years. His 1964 collection was also very successful4. Maryll Lanvin succeeded him. From 1985 to 1988, a Jules-François Crahay collection was presented in Japan as part of a contract with the company Itokin, which already managed the license for the French brand Courrèges in that country. During his career, he was awarded the Dé d'or three times for the creativity of his collections. For his retirement, he ends his days in the south of France. He died in January 1988 of a heart attack.