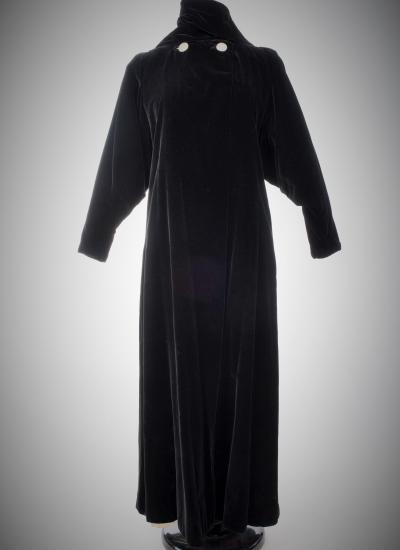 Long evening coat in black silk velvet, scarf to tie on the collar closed by two large rhinestone buttons, duchesse satin lining, Labelled Reproduction Lucien Lelong, Paris. This is a license model for export to England or the United States. Some very slight damage to the satin lining at the claw and collar, otherwise clean and flawless. Very good condition of color and conservation.

Lucien Lelong (1889-1958) is a key figure in the history of French haute couture. He designed his first collection in 1914 and took over the family business in 1919 to become successful in the 1920s. In 1934 he launched the first ready-to-wear collection under the label "Edition". Installed at 16 avenue Matignon in Paris, he created in 1925 the "kinetic" silhouette, i.e. a supple, modern, dynamic line. He was the first to imagine, a decade later, the luxury ready-to-wear and to think of the unity of a production from clothing to accessories and perfumes, considering fashion as much in its aesthetic dimension, as in its industrial and commercial dimension. That same year, he made his first trip to the United States. President of the Chambre Syndicale de la Haute Couture from 1937 to 1945, he trained Christian Dior, Robert Piguet, Hubert de Givenchy and Pierre Balmain. In 1945, he organized Le Théâtre de la Mode, directed by Christian Bérard, with lighting by Boris Kochno, sets by Jean Cocteau, Louis Touchagues and Georges Wakhévitch. The wire figures are by Éliane Bonabel, the jewelry by Van Cleef, the hairstyles are made by twenty hairdressers including Alexandre. One of Lucien Lelong's dolls is the Faïence model. This exhibition began in Paris at the Museum of Decorative Arts, then traveled to London, Barcelona, Stockholm and New York, where it was a triumph. His fashion house closed in 1948.