Printed jersey dress by Jules-François Crahay for Lanvin Circa 1972 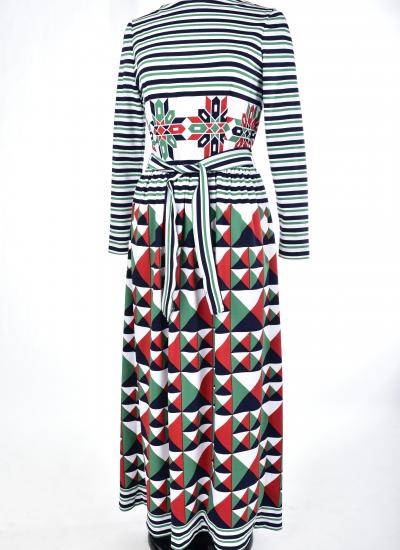 Modernist long dress in acetate jersey printed with ethnic motifs in strong polychromy by Jules-François Crahay for the House of Lanvin dating from the 1970s. Straight dress with long sleeves, plunging back closed by zip in the back and integrated belt to tie. Beautiful stretch jersey printed with ethnic motifs like Aztec or Maya. Top with stripes and skirt slightly gathered at the waist with green, red, navy and white checkerboard patterns. Lanvin label with the famous logo of the historical designer of the fashion house. No defect. Very good condition of color and conservation.

Jules-François Crahay was born in Liege to an industrialist father and a mother, Françoise, who ran a fashion house. He studied in Paris in the 1930s and then returned to Belgium to work with his mother. Taken prisoner during the war, he opened his own fashion house in 1951 in Paris with Germaine de Vilmorin, but it was not a success. Hired by Robert Ricci, he joined the House of Nina Ricci and stayed there for ten years; at first to assist Nina Ricci, he gradually took over the creation of all the models. He achieved his first success at Nina Ricci in 1959 when he presented the women's collection "Tomboy". Thereafter, he joined Lanvin for about twenty years. His 1964 collection was also very successful4. Maryll Lanvin succeeded him. From 1985 to 1988, a Jules-François Crahay collection was presented in Japan as part of a contract with the company Itokin, which already managed the license for the French brand Courrèges in that country. During his career, he was awarded the Dé d'or three times for the creativity of his collections. For his retirement, he ends his days in the south of France. He died in January 1988 of a heart attack.