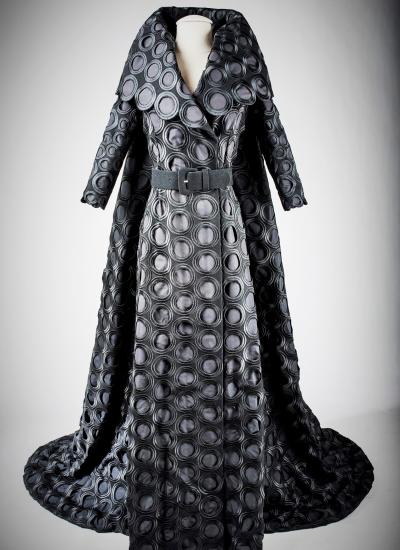 Masterful black wool coat dress (look 14) by Julien MacDonald for Givenchy in 2003. Inspired by 18th century coats, the bottom is made of double black faille fabric covered with a wool felt with large black embroidered perforations. Tubular three-quarter sleeves, wide theatrical folded collar and coat crossing closed in front by hooks. Two side slits allow a felt belt to be passed through to curve the coat in front while freeing the volume at the back ending in a train, in the manner of the French Dresses! Black taffeta lining. No defects. Very good condition of color and conservation.

Givenchy is part of one of the most famous French fashion house. Hubert de Givenchy, who worked with Elsa Schiaparelli, founded it in 1952. An admirer of Cristobal Balenciaga, he set up shop next to his master friend on Avenue Georges V in Paris in 1969. Hubert de Givenchy represented French chic throughout the world. Several institutions will celebrate his creations including The Fashion Institute of Technology in New York in 1982 and the Palais Gallièra in Paris in 1991. He retired in 1995 to be replaced by young British designers including John Galliano (1995), Alexander McQueen (1996-2001) and Julien Macdonald from 2001.