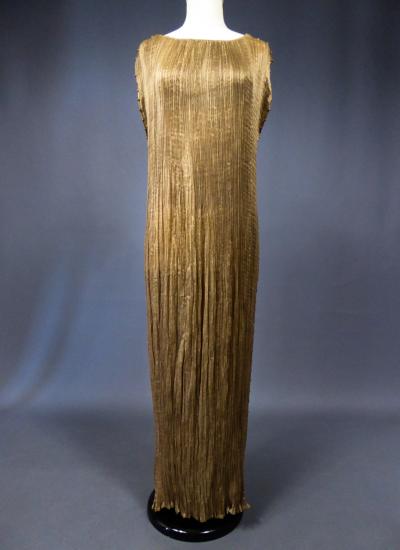 Sleeveless dress in milky coffee silk pongee, finely pleated model "Delphos", by the famous Venetian couturier who dressed the social and artistic elite after the First World War. Side trimmings and shoulder in fine cream and dark brown Murano beads connected by a light brown cotton cord. Printed on the inside edge of one shoulder, the label indicates "Mariano Fortuny Venice". Perfect condition of color and conservation.

Mariano Fortuny y Madrazo (1871 - 1949), of Spanish origin designs opera, before settling in Venice in the Palazzo Orfei in 1889. In Paris in 1910, he patented a dyeing and printing system on fabrics, then a type of wavy pleated garment for women, the Delphos dress, inspired by the Aurige of Delphi. In 1919, he opened a factory of printed fabrics on the Giudecca in Venice and soon met an immense success as an interior designer and fashion designer. At 67, rue Pierre Charon in Paris, are sold his fabrics and clothes with Renaissance, Byzantine, Coptic, Arabic, Persian or Indian motifs that correspond in his mind to specific forms: tunics, burnouses, djellabas, kaftans ... Isadora Duncan wears her Delphos dress barefoot, followed by Sarah Bernhardt, the Marquise Casati, Peggy Guggenheim and many others who buy themselves at his shop. It envelops the worldly elite of its time with dramatic and artistic effects. Mariano Fortuny is represented in Paris, London, New York, Madrid and Poland. He continued his opera scenographies until the late 1930s. He died in 1949 carrying with him the secret of his pleating techniques that will never be matched.