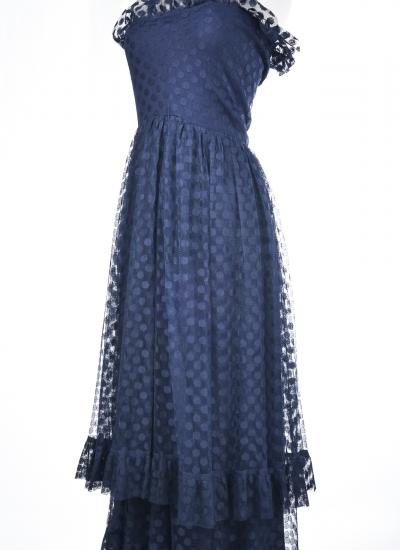 Beautiful evening dress in navy blue Polyamide tulle with polka dots by Sherrer Boutique Paris numbered A13862 dating from the beginning of the Prêt-à-porter of the famous House. Asymmetrical long dress, curved bustier with large ruffled halter neckline highlighted by a large ruffled strap with a reminder in the skirt. Lining and underskirt in navy jersey and zip in the back. The 1970s and 1980s were the heyday of Jean-Louis Sherrer, who was famous for his French-style chic and glamorous couture in the Parisian fashion scene. The dress has no apparent flaws and the polka dot tulle is very strong. Very good colour and condition.

Jean-Louis Sherrer (1935-2013) became a designer at the age of 21, after graduating from the Chambre syndicale de la Haute Couture in Paris, he joined Dior in 1956. After the death of the designer Christian Dior, he worked with Yves Saint Laurent, then with Louis Féraud. In 1962, he decided to open his own fashion house at 182, rue du Faubourg-Saint-Honoré, then in 1971 at 51 avenue Montaigne. The place became a Mecca of the Parisian fashion scene. He received the designation "haute couture". He tried his hand at ready-to-wear design. Seven years later, he imposed his brand in Japan and it was a triumph. In 1980, he received the Dé d'or de la Haute Couture Parisienne for his "Russe" collection, which was an international success. In 1997, Stéphane Rolland took over from the designer during his lifetime. The house ceased its haute couture activity in July 2007 and closed in 2008, under the dismayed gaze of Jean-Louis Scherrer.