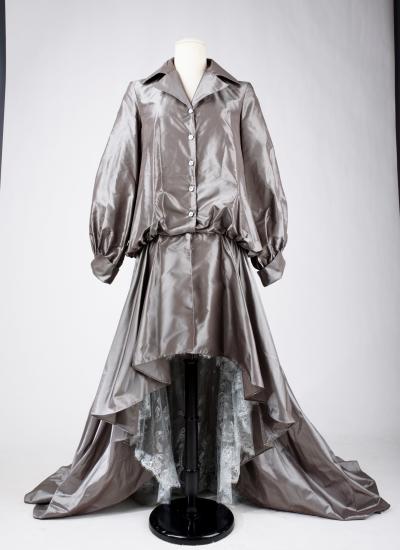 Extravagant evening coat of Haute Couture fashion show in grey taffeta of the House Carven directed by Pascal Millet from 2001 to 2007. Coat with a large blouse, long sleeves and buttons signed Carven, held on the hips and impressionat large bouffant in the back, inspired by the eighteenth century. The skirt in front of reveals sections of ice blue lace to accompany the brilliance of taffeta, to develop in long train behind. No Carven label but cotton bolduc indicating Carven n°31 A/H 2003. It has been worn only once, its condition is exceptionally good!

The famous House of Haute Couture Carven (whose name comes from the contraction of Carmen and Boyriven which is the name of Carmen de Tommaso's aunt), was founded in May 1945, and installed on the Rond-point des Champs-Élysées. Pascal Millet was artistic director from 2001 to 2007. After completing his studies at the Ecole des Beaux Arts in Dijon and a diploma at the Ecoles de la Chambre Syndicale de la Haute Couture in Paris. In 1992, he joined the Givenchy Couture House where he worked closely with Hubert de Givenchy.  After working as an assistant to Michel Goma at Balenciaga, he ended up collaborating with John Galliano and Alexander McQueen. Pascal Millet launched his brand in 2009. His work as a designer was celebrated by the Gallièra Museum in Paris in 2001.